Please utilize our new walk-in or drive-thru window at 102 S. Galena Avenue for release of medical records. Bill payments are accepted by our Patient Advocate Department at KSB Hospital.

As of October 25th, the KSB Lovett Center will be permanently closed.

For Medical Records:
Please utilize the drive-thru or walk-in windows at our new location at the former Fifth-Third bank located at 102 S. Galena Avenue.

To Pay a Bill or for Billing Questions:
Please contact the KSB Patient Advocate Department at  (815) 284-4YOU (4968) or visit them at their new location on the first floor of KSB Hospital.

Due to the COVID-19 surge in the communities we serve, KSB is restricting visitors to ensure safety for patients, visitors, and staff. Effective immediately, only one consistent visitor is allowed per patient.

All COVID-19 testing at KSB will take place at the Town Square Centre Lab between 9 am – 2 pm. Appointments are required by contacting your KSB Provider's Office. If you don’t have a primary care provider call 1 (800) DOCTORS. 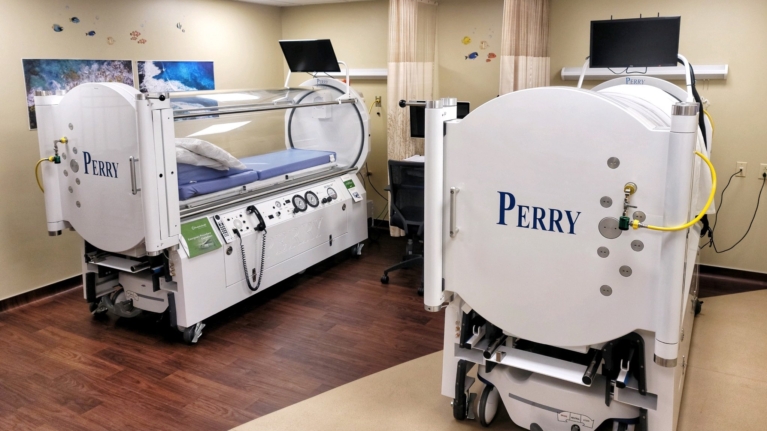 Nearly one year after adding Hyperbaric Oxygen (HBO) Therapy to their service offerings, the KSB Center for Wound Healing is expanding with the addition of their second HBO chamber.

HBO therapy is a treatment in which a patient breathes 100% pure oxygen within a pressurized chamber. This “hyperbaric” or high dose of oxygen carries more oxygen to a patient’s organs and tissues, which in turn, promotes healing and activates the white blood cells to fight infection. HBO therapy is used on all types of slow and non-healing wounds like diabetic foot ulcers, surgical wounds, crush injuries, thermal burns, radiation wounds, and much more.

Since HBO treatment is five days a week for up to two hours, and often for four to six weeks at a time, the capacity to offer this service is limited. The addition of this second chamber allows the Center for Wound Healing to provide HBO therapy to more patients.

The chamber was delivered to KSB on Wednesday, December 8th and a special team from Restorix flew in from the East Coast to help move and install the machine. This is a very meticulous process and thankfully the installation went smoothly. The first patients are scheduled to start using the second chamber later this week.

KSB's 3rd annual Jackpot Challenge starts on Thursday! There is still time to create or join a team and win cash prizes while losing weight. For more information on this 12-week weight loss competition and to sign up, visit http://www.healthywage.com/jackpot/ksb

Congratulations to all of our KSB team members celebrating milestone service anniversaries during the month of January!

Here is the latest hospitalization information at KSB.