Important information to help you stay healthy and access care when you need it.

For COVID-19 screening and other minor illnesses.

Effective immediately (3/12) the following temporary visitor restrictions will be put into place:

All caregivers are required to wash hands with soap and water or use alcohol-based hand foam/gel upon entering and exiting patient’s room. We understand these visitor restrictions may be difficult for you. While we are committed to providing a family-centered care environment, right now restricting visitors is in the best interest of our patients and staff.

Visitor restrictions are temporary and subject to change as necessary. Thank you for your cooperation in this effort. For up-to-date information related to COVID-19, please click here.

In an effort to help keep our community and employees safe, the KSB Lovett Center will be closed to the public beginning on March 23rd. Those wishing to pay a bill can do so either by using the drive-thru window located behind the building or by paying online at www.ksbhospital.com/financial-services/pay-my-bill/. In addition, Release of Medical Record services will be available via fax by calling (815) 285-5925 or through the KSB Patient Portal: https://www.ksbhospital.com/patient-portal/ 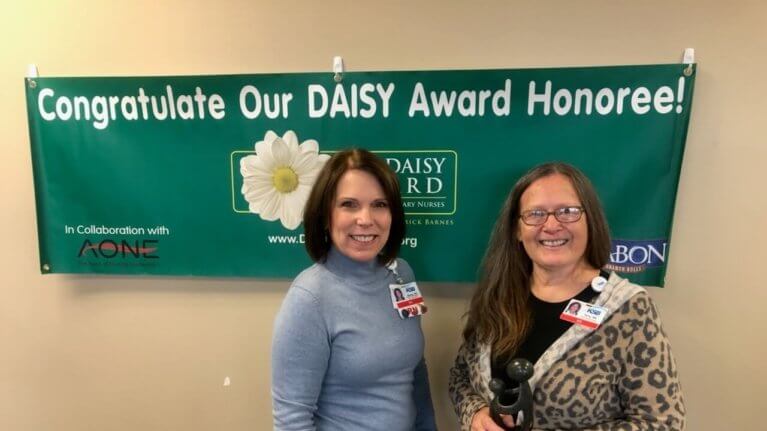 Care and compassion. These are two words that Supportive Care nurse, Terry Moen, exemplifies each and every day. On Friday evening, she was recognized as KSB’s Fall DAISY Award winner which honors outstanding nurses within our organization.

Terry was nominated by fellow Home Health Care team member, Audra Washo, NP. Audra was moved by the exceptional care Terry provided to one of her patients affected with cancer whose condition was beginning to worsen. In her nomination, Audra wrote, “Terry’s patient was experiencing episodes of confusion along with increased medical issues. His significant other was having a difficult time and called Terry on the weekend. She does not usually work during this time but without hesitation, Terry went to see the patient in his home and he finally agreed to be evaluated in the ER. The patient was admitted to the hospital and she visited the patient the following day. He really wanted to go home and Terry discussed his options with him. She took the time to listen and understand his goals of care,” Audra noted.

Terry’s patient ultimately decided to go home with hospice and given the rapport that she developed with him, he requested that she be present for the meeting. Terry was there to provide emotional support during this very difficult time.

Audra also wrote, “This is only one example of the dedication and compassion that Terry brings to her patients each and every day. I have only known Terry a short amount of time, but I have observed countless times that she has gone above and beyond for her patients.”

Home Health Director, Wendy Sofolo proudly commented, “Terry possesses all of the skills of an RN, including the technical and critical thinking skills. What sets her apart is her ability to build relationships with people. In Palliative Care, she builds relationships with our patients, people who are coping with a newly diagnosed serious illness, all the way to those needing a very warm handoff to end of life care. This is an attribute that can’t be taught; you either have it or you don’t. Terry has this gift.”

Think that you may be experiencing symptoms of COVID-19? Access KSB Care Anywhere from the comfort of your home and take our virtual coronavirus screening. Visit https://ksbhospital.zipnosis.com/

As a part of our “Brain Health 2020 Initiative”, KSB Hospital will be giving 18 people a helping hand in checking an item off of their Bucket List. Click hehttp://ow.ly/4FOx50yyNtCmrji

The staff and patients of KSB are the hearts that keep us beating! Many of our departments have joined in to spread the message of hope and positivity that these colorful hearts represent.

In times of need, we all want to do our part to be helpful. One of the most important things you can do right now is to give blood. If you are healthy and feeling well, please make an appointment for KSB’s Blood Drive on Tuesday, April 21st. It will take place from 9 am – 6 pm at the Dixon Elks Lodge. In order to ensure everyone’s safety, the American Red Cross has implemented extra precautions during this time. - Donations will be taken by appointment only by visiting www.redcrossblood.org or by contacting Aaron Fox at (815) 285-5836. - Both donor and staff temperature checks will be taken before entering the blood drive area - Frequent sanitization of donor areas - Spacing of beds 6 feet apart

In consideration of the constantly evolving recommendations to stay healthy, here are six things you should be doing to protect yourself and your family during the COVID-19 outbreak.